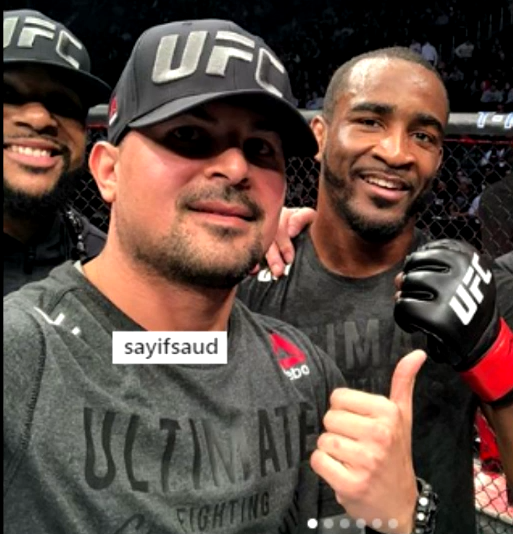 Sayif’s martial arts training began in his father’s dojo at the age of three. He won two state titles in the process of earning his black belt in judo, then went on to study Shorin-Ryu karate and won four national titles. He received his Black Belt in 1997 from Sensei Saud at the USKK Nationals.

Shortly after, Sayif focused his attention on academics and bodybuilding. He graduated with honors from Indiana University-Bloomington with a degree in Political Science, then attended law school at Indiana University – Indianapolis. During this time, Sayif also won several NPC bodybuilding competitions and was featured in multiple magazines.

Ultimately, Sayif’s passion for the martial arts led him to study with world-class trainer Greg Jackson in Albuquerque, NM from 2006-2009. While there, Sayif also closely studied wrestling with former NCAA Division 1 champion and UFC vet Mike Van Arsdale and renowned striking Coach Mike Winklejohn; being cornered by all of these coaches at one point or another while competing.

Some of Sayif’s submission grappling accomplishments include winning Best of the West and American Championships tournaments and earning a Grappler’s Quest silver medal.

Undefeated as an amateur his competitive career culminated with an undefeated professional record of 3-0 in MMA but was cut short due to injury.

His coaching journey began at Octagon MMA in 2009, where he would begin to build a special team of fighters who started making waves across various fighting promotions. Working with over 20 fighters from such elite promotions as Legacy FC, UFC and Bellator. He brought some of the world’s best athletes and trainers to Texas, including notables Greg Jackson, former UFC champion Rashad Evans and former Strikeforce champion Muhammed “King Mo” Lawal among many others.

Coach Saud’s team compiled a 40-5 record in 2011 and he was recognized as TXMMA’s “People’s Choice” for Coach of the year.

A few years later, NBA All-Star Deron Williams would partner with Saud to open Fortis MMA in 2017. When the doors opened at Fortis, there was not a single fighter under the UFC banner. In less than two years, Saud has created a powerhouse filled with UFC talent as the number is well into double digits and steadily rising with talent earning their way in through Dana White’s Contender Series.

What has made Saud so successful with his team is his no-nonsense approach to coaching his athletes. He ensures that anyone who wants to be on team Fortis is fully committed to the team at all times. Saud prefers to have home-grown talent that will be there to help each other prepare for fights, which in turn, helps create a positive team culture.

Saud doesn’t sugar coat anything with his fighters. He will give them direct, honest feedback during training and during fights. Through building strong relationships with each athlete, he knows who needs to be yelled at to get fired up and who needs a few calm, honest words.

In Fortis’ short history, Saud already has an Ultimate Fighter Champion in Macy Chiasson and an ever-growing roster of fighters climbing the UFC’s ladder-like Geoff Neal and Alonzo Menifield. If you’re tuning in to a UFC card on any given weekend, chances are you’ll see Saud cornering a fighter. Expect nothing but big things going forward as his gym is expanding into a bigger location in 2019.